Québec Alert Ready is the system used by the ministère de la Sécurité publique (MSP ) to quickly alert Quebecers to events posing a real or imminent threat to their lives or safety. The alert message that is then disseminated provides valuable information on the dangerous situation in progress and indicates the safety behaviours to adopt in order to enable citizens to protect themselves and reduce the probable consequences of the event.

Responsibility for broadcasting public warning messages is shared between the federal, provincial, and territorial governments and Canada’s broadcasting and telecommunications companies.

This system is designed to complement the traditional media, social media, and tools in place in municipalities to improve communication concerning an emergency situation.

The ministère de la Sécurité publique (MSP ) is responsible for broadcasting official public alerts to Quebecers through Québec Alert Ready. These messages warn of events that could put people at risk or endanger their lives.

Environment and Climate Change Canada (ECCC) also has a mandate to issue public warnings about dangerous weather conditions that might strike Québec, such as tornadoes.

The Sûreté du Québec and the Service de police de la Ville de Montréal have the authority to trigger a Québec-wide Amber alert. All Amber alerts are relayed by MSP via Québec Alert Ready.

The Sûreté du Québec, Québec municipalities, and their emergency responders may request that the MSP broadcast an alert message if an event taking place on the territory that they cover poses an imminent or immediate threat to the lives of residents of that territory.

Pelmorex Communications Inc. has been designated by the Canadian Radio-television and Telecommunications Commission (CRTC) to develop the platform that enables MSP to broadcast emergency messages.Find out more..

Broadcasting and telecommunications companies have an important role to play in the proper functioning of the alert system, as they must ensure that they are connected and able to broadcast the emergency alerts issued by the MSP and ECCC.

The CRTC is an independent public authority in charge of regulating and supervising Canadian broadcasting and telecommunications. Find out more.

In August 2014, the CRTC made it mandatory for all radio and television broadcasters and cable and satellite companies to distribute critical alerts issued through Pelmorex Communications Inc.’s Alert Ready system. See Broadcasting Order 2014-444.

On April 6, 2017, the CRTC ordered all wireless service providers to implement a public alerting system on their Long Term Evolution (LTE) networks. This decision is the result of an extensive public consultation to obtain public input on the participation of wireless service providers in the National Public Alerting System (Telecom Notice of Consultation CRTC 2016-115).

In a bid to standardize public alerts issued across the country, a pan-Canadian working group of officials developed Common Look and Feel Guidance for broadcasters, also known as last mile distributors (LMDs).

The sound or look of an alert may differ from the examples below, due to technical or technological constraints. If you think that content is inadequately presented, please notify your service provider or the broadcaster concerned.

LMDs must emit an audio signal announcing the broadcast of an emergency alert. The purpose of this sound is to clearly differentiate between alerts issued in the United States and those issued in Canada. Subsequently, an audio message resulting from the conversion of the emergency alert text message is played. Here’s an example:

Where possible, media broadcasters must present the warning message in white text against a red background, either as a full screen notice or as a crawler section at the bottom. Text must be large enough for viewers to read easily. 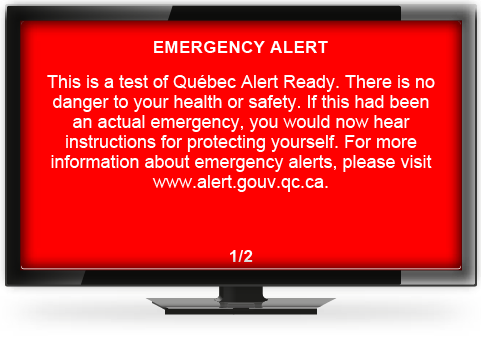